The hotel has bookings and continues to operate with a sizeable non-union staff. Management simply rejects all negotiations, despite the union’s proposals for negotiated reductions in staffing, wages and hours in response to the crisis.

The 4 union leaders had been previously dismissed in an attack on the union in 2015 but were reinstated the following year in response to international pressure from the IUF. Their rights, and the rights of their members, however, were not secured. Employers in Myanmar continue to benefit from major weaknesses in the legal environment for ensuring respect for freedom of association.

An IUF complaint to the ILO’s Committee on Freedom of Association, lodged in 2015 in response to the earlier anti-union dismissals, highlighted these obstacles and remains ongoing. The IUF has submitted new material to the ILO in response to this latest attack on union rights, and stands fully behind our affiliated independent hotel union HLOB in their fight for rights. 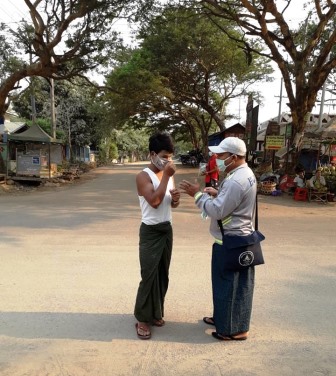 Thien Shwe, one of the unfairly terminated union leaders at Bagan Hotel River View, distributing masks for free in April. This was part of an a COVID-19 community awareness initiative organized by HLOB to help in stopping the spread of COVID-19 in Bagan.