Nestlé’s Corporate Business Principles state that their business practices are “designed” to “establish a constructive dialogue with unions. In fact they have little choice – if they want to respect international Conventions and treaties which anchor this obligation in international human rights law.

In 2008 – after a year of struggle – Nestlé management conceded that that the union representing Kit-Kat workers in the Russian city of Perm could negotiate the wages management had declared a “commercial secret”. Less than two years later, Nespressure – squeezing workers and suppressing rights – is being applied again at Nestlé Russia.

In November 2009, workers at Nestlé Waters Direct in Domodedovo, 30 kilometers outside Moscow, joined together to address the problem of eroding real wages and deteriorating working conditions. Nestlé’s subsidiary in Domodedovo bottles and delivers Pure Life water to homes and offices. Workloads have increased substantially for drivers following the 2008 closure of one of the company’s three Moscow-region distribution depots (increasing pressure on remaining drivers). Drivers are paid according to a piece rate/bonus scheme. Working days of 12 hours or more are necessary to reach a reasonable level of pay. Last year, the number of dispatchers was reduced by 50% in a cost-cutting exercise, which dramatically increased the workload on the survivors. So drivers, joined by dispatchers, formed a union and on November 17 obtained legal status by joining the All-Russia Trade and Service Employee’s Union ‘Solidarnost’.

Management immediately began harassing the union chairman and interfering with his access to members. Drivers were reassigned to work as loaders, eliminating the drivers’ bonus, or assigned to smaller vehicles, making it impossible to achieve the bonus quota even with 15-16 hours of work. Drivers who joined the union have seen their pay cut by up to 40%.

Union communications to management, supported by the Russia-wide Nestlé Union Coordinating Council, requesting negotiations to determine work schedules, overtime and bonus pay and an end to the anti-union harassment were not answered. 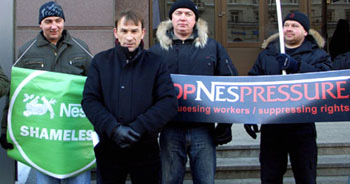 On January 24, braving a temperature of -20 degrees Celsius, union members demonstrated in support of their rights at Nestlé’s Moscow headquarters.

On January 27, union vice-chair Sergei Strykov was summarily dismissed. Though Strykov had a perfect work record, he was accused of financially damaging the company by consistently selling the extra bottles drivers have previously been encouraged and rewarded for selling! At a meeting with the bosses, union activist Strykov was told he could collect the overtime he is owed in exchange for “resigning by mutual consent” with the management.

Strykov is one of a group of workers who filed a legal case against the company on January 21 to recover unpaid overtime payment – in Strykov’s case money owed since January 2006.

When he refused to “resign”, he was fired and ordered to immediately relinquish his company uniform – shirt, coat, hat and shoes – in subfreezing weather!

The Nestlé Domodedovo workers have not been intimidated by the brutal sacking of their union vice-chair. Union members and their supporters turned out  for another rally at the factory gate on February 5.

The union is demanding the reinstatement of vice-chair Sergei Strykov, that all union members are reinstated to their former work assignments; an end to all anti-union discrimination through rates, bonuses and job assignments and negotiations between management and the union on working conditions and overtime pay.

You can support their demands – CLICK HERE to send a message to Nestlé Russia’s Human Resources Director and to corporate management in Switzerland. Stop Nespressure! 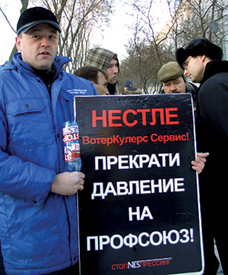 Nestlé – Stop Pressure on the Union!