The Union of Nestlé Indonesia Workers in the Nescafé factory in Panjang, SBNIP, has been the recognised representative of workers in the Panjang factory and Nestlé’s negotiating counterpart since 2000.

In late 2007, the union put forward proposals for the 2008-2009 CBA, including negotiated wages (instead of the paternalistically imposed annual wage increases), which were clearly not to the liking of management.

Their response was to challenge the legitimacy of the union (after 7 years of industrial relations!) and to demand that the union’s representativity be verified by the local labour office. The verification certificate was delivered on 3 December 2007.

On 12-13 December, management hosted an “awards ceremony” in a local hotel. Workers invited to this event used the opportunity to form a “union” which they called the Communication Forum of Nestlé Indonesia Workers, FKBNIP.

Since then, Nestlé has been engaged in an all-out effort to undermine the SBNIP and avoid negotiations. It has done this by openly supporting the rival organisation we have every reason to believe it created itself.

In November 2008, the IUF filed a complaint against Nestlé under the OECD Guidelines for Multinational Enterprises with the National Contact Point within the Swiss government responsible for Guidelines compliance. The complaint focussed on violations of the right of workers to be represented by bona fide trade unions and to engage in constructive negotiations with a view to reaching agreements on employment conditions (ILO Conventions 87 and 98).

Nestlé Indonesia refused to bargain wages contending that “remuneration is the prerogative of the employer and is based on individual performance” (quoted from the minutes of the deadlocked negotiations of April 2008). Nestlé headquarters, in turn, contended that because ILO Convention 98 on collective bargaining does not expressly mention “wage bargaining”, the refusal to bargain wages was not a violation of the Convention.

Confronted with overwhelming evidence to the contrary (ILO jurisprudence confirming that wages are an integral part of “employment conditions”, assertion of workers’ wage bargaining rights by representatives of the Indonesian Labour Ministry), Nestlé conceded in August 2009 that it would be willing to enter into wage bargaining in Indonesia.

So why is the SBNIP still fighting for wage bargaining rights?

Consistent with past practice, Nestlé’s approach is one of “damage control” rather than principled, serious efforts at complying with its obligation to respect international human rights standards. Now that headquarters has committed to wage bargaining, Nestlé Indonesia has committed to making that impossible for the SBNIP… unless the union agrees to bargain together with the Nestlé workers’ “communication forum”.

Nestlé’s insistence that the organisation it openly supports take part in negotiations is only the latest in an ongoing series of attacks against the SBNIP’s trade union rights and an affront to the union’s leadership and members. The SBNIP fought for over two years for wage bargaining rights and now must “share” them with an organisation that up until now has shown no interest in wage bargaining.

Nestlé is now saying that both organisations should be at the bargaining table – and has conveniently received an official request from the FKBNIP – because neither represents a majority of workers in the plant. In fact, Nestlé management has used the time over which the OECD submission has dragged on to intimidate and coerce workers out of the union, to push workers into the communication forum, and to frighten workers into declaring they would not join any organisation.

It is now three years that the union at Panjang, the SBNIP, has been vainly seeking to begin the process of negotiating a collective agreement that includes wages. Nestlé’s latest ploy only highlights the company’s disgraceful conduct and shameless efforts to delay and deny justice. 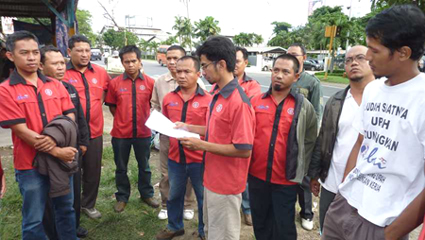 Panjang, March 19, 2010: SBNIP members meet outside the factory gate. President Eko Sumaryono reads out the statement presented to Nestlé management at a meeting earlier that day. In response to management’s demand that SBNIP undergo a new verification process, the union clarified that, “the SBNIP is the only trade union at Nestlé Panjang. The SBNIP was freely and independently created by workers at Nestlé Panjang. The SBNIP is the only bargaining agent representing workers’ interests at Nestlé Panjang.”
After hearing the statement, management said there would be no more discussion, indicating they would insist on verification. They instructed FKBNIP representatives present not to say a word and immediately closed the meeting.

CLICK HERE TO SEND A MESSAGE TO NESTLE – STOP NESPRESSURE ON INDONESIAN WORKERS!