Management of Nestlé Waters Russia has declined to appeal the court-ordered reinstatement of Sergei Strykov, Vice-Chair of the union formed last year who was fired on January 27. Strykov has also been compensated for wages lost from January through May, while the union was fighting his illegal dismissal.

Strykov’s dismissal was part of a series of harsh anti-union measures inflicted by Nestlé management in an attempt to stop the union from developing. The union fought back with a series of public actions, backed by international support. 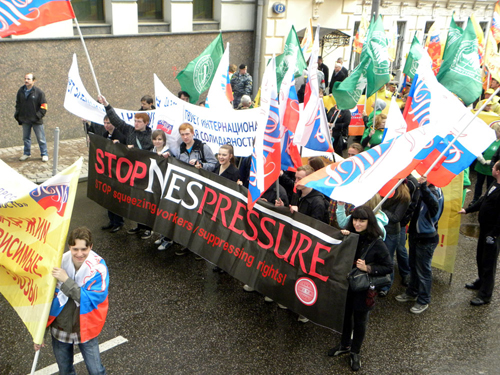 While the workers are still seeking negotiations around urgent issues including workloads, work assignments and overtime pay Nestlé’s decision not to fight the  reinstatement represents a clear victory for the campaign to defend basic union rights at Nestlé Domodedovo.