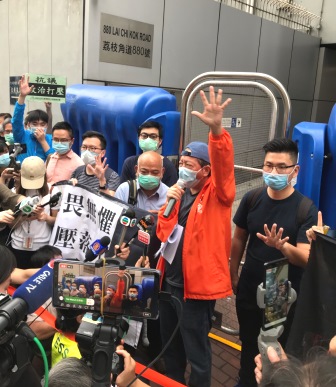 Under cover of the COVID-19 emergency, Hong Kong authorities on April 18 arrested Lee Cheuk Yan, general secretary of the Hong Kong Confederation of Trade Unions along with 14 other prominent activists in the pro-democracy movement. They are charged with organizing and participating in mass protests in August, September and October last year.

Lee and some of the other democracy activists arrested again on April 18 had previously been arrested on February 28 for participating in the August 31 mass demonstration last year to mark the 5th anniversary of the Chinese authorities’ decision to deny the people of Hong Kong their right to universal suffrage. Separate hearings on the February and April charges are scheduled for May. By piling up charges, Lee told the UK Guardian, the authorities are taking advantage of the pandemic to pursue a policy of “revenge and retaliation” against the democracy movement to enable a compliant majority in September’s Legislative Council elections and prepare new repressive legislation.

The IUF has written to the Hong Kong authorities to demand the immediate and unconditional dropping of the charges against Lee and all those facing prosecution for their democratic activity and engagement along with full respect for freedom of expression and assembly.