This was the third time he carried this message to the BAT annual meeting. He called on BAT to use its influence, as the largest shareholder and a major customer of Reynolds American Inc., to ensure that the human rights of migrant tobacco farm workers in the State of North Carolina are respected and protected.

IUF General Secretary Ron Oswald was at the shareholders’ meeting, as were representatives of the US national centre AFL-CIO and of UNITE, which represents BAT workers in the UK, to support FLOC and the call for freedom of association and worker representation as the way to ensure rights.

The action at the BAT shareholders meeting marks the start of a new campaign to secure rights for thousands of farm workers in North Carolina. The next stop is Raleigh, North Carolina, where FLOC members and supporters will rally outside the Reynolds American shareholders’ meeting on May 8.

Support the campaign by clicking here to send a message to BAT Chairman Richard Burrows telling RAI to sign an agreement with FLOC which will ensure rights on their supplier farms! 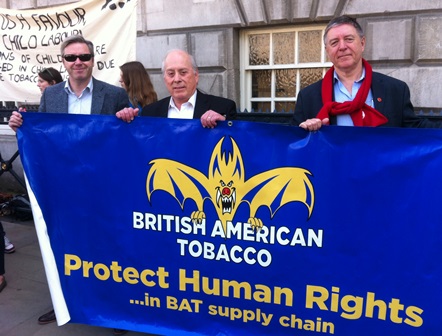