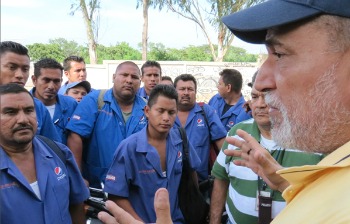 On November 9, 2014 workers at the Nicaraguan logistics company which markets and distributes products made by PepsiCo’s flagship Central American bottler Embotelladora Nacional S.A. (ENSA) formed a union in Managua. Within 24 hours the company fired 70 members and leaders.

At the request of the union, the Ministry of Labour inspected the ENSA plant, verified the mass dismissals, confirmed the violation of basic rights and ordered the company to reinstate the illegally dismissed workers.

In a meeting with Marcial Cabrera, General Secretary of the United Federation of Power Workers who is advising the Union of Schneider Workers, the company proposed to  reinstate only 45 of the dismissed workers, leaving out the 25 activists who organized the union. Schneider National then appealed the Ministry’s reinstatement order, which was upheld. Workers continue picketing at the main entrance of the ENSA-Pepsi plant in Managua in defense of their rights.

Although Schneider National Logistics delivers PepsiCo products in Nicaragua and their workers wear uniforms which display the Pepsi logo, it denies a direct relationship with Pepsi. This denial of responsibility mirrors PepsiCo’s denial of responsibility for the human rights violations of its warehouse operators in West Bengal, India, where 162 workers were brutally fired for organizing a union at three warehouses exclusively contracted by PepsiCo in 2013.

Will PepsiCo again deny responsibility for serious rights abuses in its supply chain?