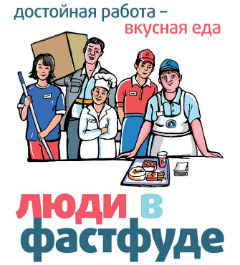 On April 14, 2016, the third IUF International Fast Food Workers’ Day, the Russian IUF-affiliated union Novoprof launched the “People in Fast Food” campaign in Moscow under the slogan “Decent Jobs – Tasty Meals” with the aim of organizing fast food workers to fight for decent jobs. As in many other countries, the majority of fast food employees in Russia are adults, who are often supporting families and whose jobs are the main source of family income.

Ivan Milykh, President of Novoprof, commented “the main issues are common for the whole sector and migrate from one restaurant to another, so changing workplaces brings workers no gains. Our objective is to show workers that these common problems can only be dealt with collectively through organizing and demanding decent jobs throughout the sector.”