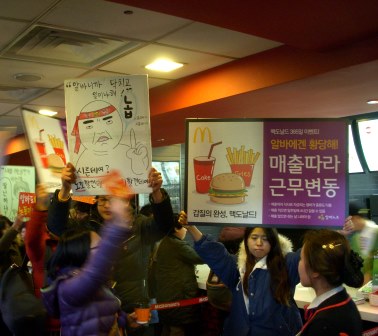 The Korean Arbeit Workers’Union, which has been leading the fight against abuses at McDonald’s Korea, capped its 2nd congress on February 7 by occupying the fast food giant’s Shinchon outlet in Seoul. Members gathered outside the restaurant chanting slogans demanding the company reinstate union activist Gahyun Lee, who was dismissed from her job at a McDonald’s outlet in Yeokgok, Gyeonggi Province last September 15 after she exposed wage and hours violations and travelled to Los Angeles to support the national action by US fast food workers.

Police blocked them from entering the restaurant to join demonstrating union members inside.

The union, which has decided to join the IUF, has vowed to continue organizing part-time workers and bring about real change at McDonald’s.

You can support them! If you haven’t yet done so, CLICK HERE TO SEND A MESSAGE to McDonald’s Korea corporate management calling on the company to reinstate Gahyun Lee, recognize union rights and representation and enter into good faith talks with the union over unfair practices.