Home/News/Organizing, fighting and winning together: the IUF 27th Congress 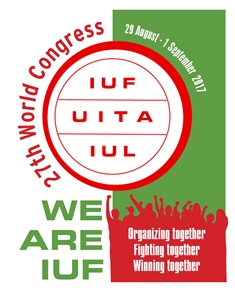 The 27th IUF Congress, held in Geneva from August 29 to September 1, 2017, was the largest, most representative, and most participatory Congress in our history. Of the 518 participants from around the world, 339 official delegates took part in the work of the Congress – an increase of nearly 29% over 2012. All regions and sectors were strongly represented in a Congress marked by a high degree of enthusiasm, militancy and solidarity.

Congress mandated the secretariat to continue to expand the scope of its transnational company work. The IUF’s culture of solidarity was highlighted by the enthusiastic reception for the launch of the “We are Atra and Lutfi!’ campaign in defense of dismissed union members at the Indonesian subsidiary of Coca-Cola’s regional bottler Coca-Cola Amatil.

The IUF’s commitment to equality in the workplace and in society took an important step forward with a well-attended pre-Congress first-ever meeting of LGBTI Workers and Allies, who will now constitute a formal group within the IUF structures and be represented on its governing bodies. For the first time, a pre-Congress Young Workers’ Conference was held. Young workers will now also constitute a Young Workers’ Committee and be represented on the IUF’s governing structures. Working groups designated by the LGBTI workers and allies and young workers conferences will take this work forward on the basis of changes to the IUF rules adopted by the Congress. The largest-ever Women’s Conference met before the Congress and revised the IUF Action Program for Equality to take account of new issues and challenges facing women workers and trade unions. Women now make up a majority of members of the IUF’s Strategic Leadership Committee. Patricia Alonso (FAUPPA, Argentina) will chair the IUF Women’s Committee.