Some 60 housekeeping staff and valets at Paris prestigious Park Hyatt Paris Vendôme Hotel went on strike and took to the streets Friday under the banner: “The class war starts here.”

The staff, for the most part sub-contractors for service agency La Française de Service, are demanding pay rises, better working conditions and to become employees of the Hyatt Group.

They have been joined by seven members of the hotel staff, who are also complaining about working conditions at the luxurious five-star establishment in Paris’s up-market Second Arrondissement.

“Hyatt’s management says that this problem is entirely between the staff and the sub-contractor, but this is manifestly not true,” said Harold Kreyder, a hotel valet and and representative of the CGT union, under whose banners the strikers were demonstrating. “There is a significant number of other Hyatt colleagues who support this action, but they fear company reprisals,” he added. 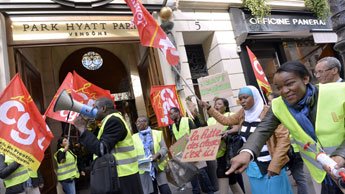