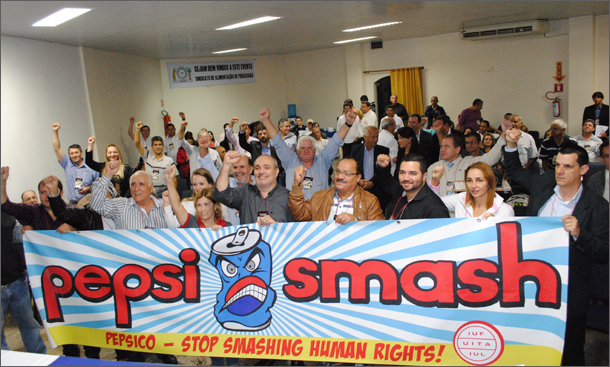 Food workers in São Paulo (Brazil) stand in solidarity with the ongoing struggle by fellow PepsiCo warehouse workers in West Bengal, India, where the company does not allow them to organize a union. On the occasion of the Food Workers National Symposium, which took place in Piracicaba on  27 and 28 May, workers displayed a poster which read: “PepsiCo destroys human rights”.

Melquiades de Araújo, president of the Food Industry Workers Federation in São Paulo (FETIASP), explained the protest was convened in solidarity with the workers in India.

“In 2013, workers in three warehouses exclusively contracted by PepsiCo for handling Frito-Lay products registered their union. Following this, they were harassed, assaulted by company goons and 162 out of 170 employees were abruptly fired”, pointed out the officer.

The action was held within the international campaign, called PepsiSmash, launched by IUF together with its affiliates around the world.