Published: 25/03/2014
The pay differential between the CEO and a low-paid worker at PepsiCo is now 14,055:1. CEO Indra Nooyi’s total compensation for 2013 came to USD 18.6 million – a 7% jump over the previous year’s package. A worker at PepsiCo’s warehouses in West Bengal, India would need 14,055 years to earn what the top boss made – providing they renounced their human rights and managed to keep the job. In 2013, workers at three warehouses organized a union, submitted their demands and were brutally fired.

They were eventually told they could return to work if they cut up their union cards and stepped on them as they walked into the warehouses, declared they would never again join a union and signed false statements they were told were legally binding. A group of these workers refused to surrender their rights and are fighting back – SEND A MESSAGE TO PEPSICO! 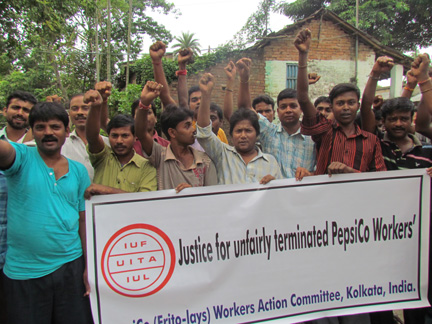 A tiny portion of the chief’s pay package, which includes “base” salary, bonuses, stocks and options, was USD 102,772 for the use of the company aircraft. A  West Bengal warehouse worker would have to stack PepsiCo products like Lays and Tropicana 365 days a year for 77.6 years to earn this amount.