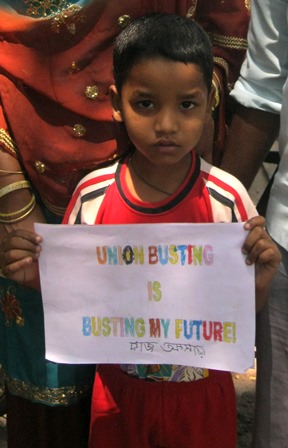 Satyajit Debnath, the father of a young child, dreamed of building a real home to replace the bamboo structure he lives in with his family. He was saving for this while working at a warehouse in India contracted exclusively to PepsiCo, but was sacked for defending his rights as a worker. Now he worries if the flimsy hut they live in will survive the monsoon rains. SEND A MESSAGE TO PEPSICO!

Satyajit was dismissed along with 161 other warehouse workers when they formed a union. Under pressure from an international campaign, PepsiCo said it had no responsibility or obligation towards these workers but nonetheless had helped to secure offers of re-employment. The reemployment conditions included formally renouncing any future trade union membership in statements workers were falsely told were legally binding. Supported by the IUF, Satyajit and others who rejected these illegal and humiliating conditions formed an Action Committee to fight for their rights. “I need my job back”, says Satyajit, “but if we are workers then we must have the right to be in a union.”

The IUF insists that Satyajit and his Action Committee workmates must be offered jobs at the warehouse or in PepsiCo’s own operations, with full back pay and guarantees that their rights will be protected. CLICK HERE TO SEND A MESSAGE TO PEPSICO!