The first in a series of Congressional hearings into abuses and illegal practices by Philippines tuna producer Citra Mina got under way on March 18 in the Philippines’ House of Representatives, marking an important milestone in the long fight for justice for Citra Mina workers. The workers, supported by the national center SENTRO and the IUF, are demanding recognition of their union and the reinstatement of 70 members and supporters who were brutally dismissed in waves of repression beginning in September 2013 after the union was founded and registered.

Witnesses including union president Jumary Arevalo, SENTRO general secretary Josua Mata and one of the 43 detained crew members rescued by the union after their Citra Mina-financed vessel was seized for illegal fishing in Indonesia waters last year, detailed the Citra Mina Group’s pattern of abuses: systematic violations of labour standards and trade union rights, rampant abuse of precarious employment and shell companies to evade legal obligations, slave-like conditions on boats and deaths on the high seas. 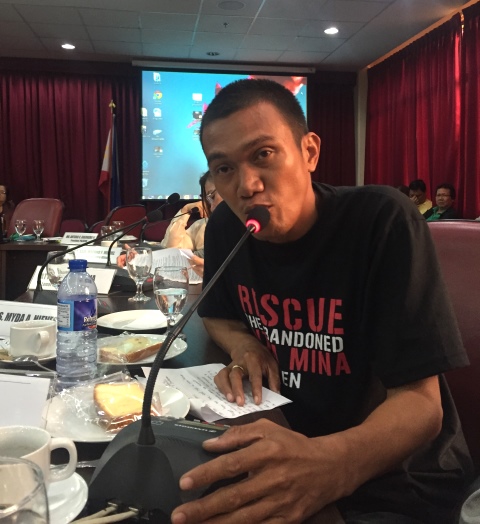 Clyde Batellante, one of the rescued Citra Mina fishers, testifying at the hearing

Department of Labor and Employment Undersecretary Rebecca Chatto, in response to the company’s lawyers, emphasized that the government holds both the fishing vessel owner and the fishing company jointly liable for all labour standards violations, and was developing an appropriate approach to enforcing standards on fishing vessels – an initiative promoted by the union in response to deaths at sea on vessels fishing for Citra Mina.

The Chair announced that the captain of the vessel seized by the Indonesian authorities last year would be asked to respond to questions at the next session of the ongoing hearings.