Published: 10/09/2016
The fight of the Citra Mina workers for reinstatement and for recognition of their union became central in uniting workers of General Santos, the capital of the Philippines’ tuna industry, within the Tuna Workers” Solidarity initiative led by the trade union center SENTRO.
In early September tuna workers’ delegation participated in the Tuna industry congress – an annual 3-day event which brings together all seafood producers and buyers and experts on issues of seafood sector sustainability. SENTRO/Citra Mina Workers’ Union used the opportunity to engage the congress participants in a dialogue on the significance of respecting labour standards and human rights (on the positive impact that respecting labour standards and human rights could have for the development of the industry and the whole economy of General Santos.
While the delegation was working inside the congress building, almost a hundred members of the union gathered in front of it with their banners and leaflets calling for immediate resolution of the labour conflict at Citra Mina. 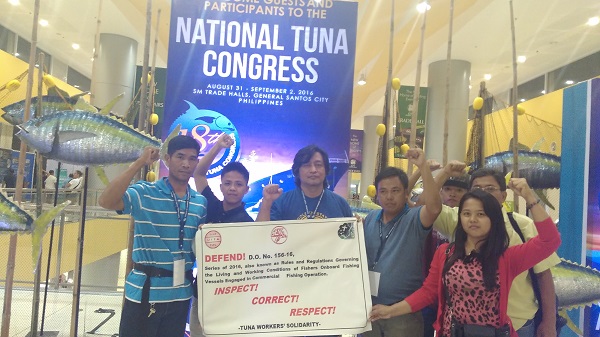