Published: 29/05/2015
Phillips Seafood Restaurants is one of the oldest and largest seafood restaurant chains in the United States. The associated Phillips Foods, the world’s largest processor of crabmeat which also produces a full line of fish products, relies on 17 overseas plants, because US stocks are exhausted due to overfishing and pollution. So the company claims to be promoting sustainable fisheries. In fact it relies on disposable jobs – but Indonesian workers are fighting back and winning support for their struggle. Half the workers in Phillips’ crab factory in Lampung, Indonesia are casual workers with no employment security and no benefits. They work on a purely casual, ‘no work, no pay’, or on  piece-wages. On April 29, Phillips announced that 172 of these precarious workers, many of whom have worked as long as 10 years at the plant, were no longer needed. 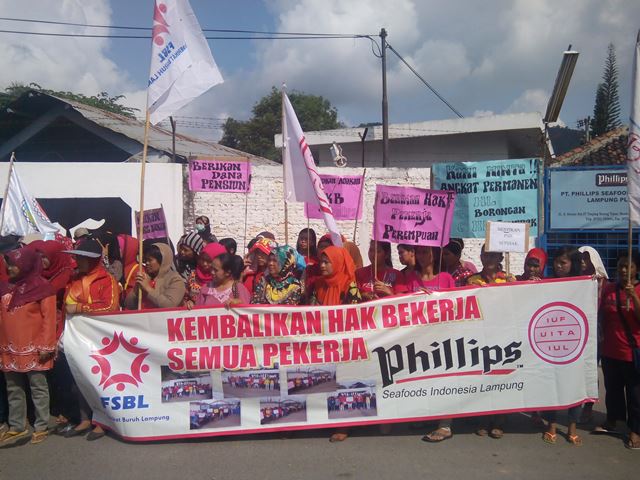 With support from the IUF and the affiliated Federation of Lampung Workers’ Unions, the dismissed workers are demanding continued employment and conversion to permanent status. The Federation held a protest rally on May 27 in front of the factory and plans further support action.