The IUF-affiliated Farm Labor Organizing Committee (FLOC) has condemned proposals by the Trump administration to lower minimum wages for farmworkers and pledged to fight any lowering of standards. The proposed measures would allow employers to pay migrant workers admitted to the US under the H2A visa program less than the agreed “adverse wage effect rate”, based on the minimum wage for the surrounding area. Workers entering on H2A visas make up some 10% of the agricultural work force.

“While the nation is negotiating such things as premium pay for ‘essential workers’ along with sick pay, payroll protections, etc., farm workers are left out of consideration”, says FLOC President Baldemar Velasquez in an April 14 statement.  “This leaves the essential worker status as meaningless, except that they are allowed into the country to fill jobs that are now under more vulnerable conditions.” 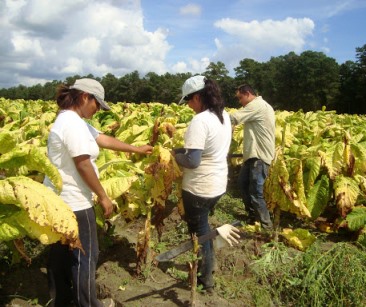 Velasquez emphasizes that federal agricultural policy feeds farmworker exploitation because it largely benefits giant growers operating nearly year-round supplying US and global corporate supply chains, while smaller farms employing fewer workers for only part of the year are squeezed by corporate pricing and procurement policies. FLOC believes a national policy debate is urgent, and a precondition for that debate is “more organizing and real freedom of association in agriculture throughout the country” to ensure that ” workers on the front lines have a vehicle and a collective/unified voice to make sure that any legislative effort actually reaps benefits for workers.”

Velasquez adds: “If we know that a minimum wage in agriculture is crucial to support workers, there needs to be a parallel effort for minimum price structures and procurement policies among global corporations, such as manufacturers, grocery chains, giant retailers, restaurant chains, food production, and tobacco manufacturers. If farm workers deserve a sustainable wage, then small farmers with labor intensive crops that are suppliers to large companies deserve a sustainable price.”