Home/News/Protest march against martial law, extra-judicial killings in the Philippines

Published: 22/09/2017
The IUF and its affiliates NUWHRAIN and SENTRO Food & Beverage Workers Council joined a protest rally on September 21 organized by a coalition of human rights and labour organizations to denounce the Duterte government’s human rights violations and demand an end to martial law in Mindanao. Over 12,000 people, mainly from poor urban communities, have been killed in extra-judicial killings sanctioned by President Duterte, with those involved granted impunity.

Under the banner “Manlaban para sa Karapatan!” (Fight back for rights!) the rally marked the 45th anniversary of the declaration of martial law across the Philippines under the Marcos dictatorship and warned that Duterte could declare martial law and establish a new dictatorship. 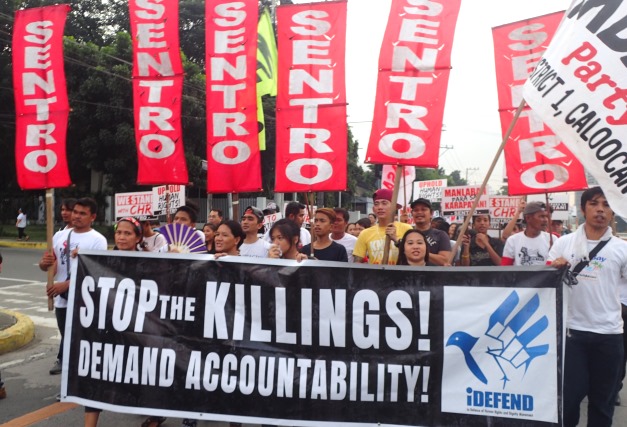 The protest march began at the Bantayog ng mga Bayani Center – a memorial dedicated to martyrs and heroes killed during martial law and the People’s Power Revolution –  and ended at the offices of the Commission on Human Rights. Last week, the Duterte government’s disdain for human rights was demonstrated with the passing of a bill that reduced the annual budget of the Commission on Human Rights to just 20 dollars. Although the budget was subsequently restored, Duterte has sent a clear message that systematic human rights abuses and impunity will continue.