A group of workers at Seoul’s Marriott Renaissance Hotel who were outsourced and then sacked for challenging their treatment have been reinstated as permanent direct employees after a 9 year struggle, proving that resistance pays. 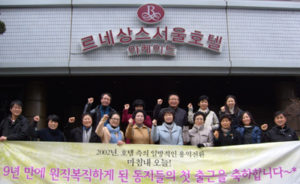 usekeepers, members of the Renaissance Labour Union, returned to their former workplace as fulltime employees. Their long struggle began in 2001, when over one hundred housekeeping employees were forced to resign as direct hotel employees and re-employed through an instant outsourcing firm at 60% of their former wages though performing the same work.

The workers formed a union – the Renaissance Labour Union, a member of the IUF-affiliated Korean Federation of Service Workers’ Unions (KFSU) – and filed a complaint for unfair labour practices. In May 2004 a Labour Ministry investigation determined that the subcontracting constituted an “illegal dispatch” (i.e. the workers’ real employment relationship was with the hotel as the contracting company) and ordered the hotel to employ them directly. The hotel didn’t do it, so in November 2004 a group of workers initiated a civil lawsuit, charging the hotel with delayed payment of wages – the difference between direct employees’ wages and those paid by the service company. In retaliation, the outsourcing company sacked them on December 31, 2005.

On January 1, 2006, union members set up a daily picket line. Regular union demonstrations, supported by the KFSU and the regional organization of the national center KCTU, were held in front of the hotel despite a court order authorizing the hotel to claim over USD 20,000 in “damages” from the workers as compensation for alleged business losses.

In November 2006, the Public Prosecutor’s Office mysteriously dropped proceedings against the Renaissance management for failing to implement the Labour Ministry’s ruling that the outsourcing was illegal. The workers had to wait for the decision in the civil suit, and continued to demonstrate despite new claims for damages and intimidation by riot police.

Justice was again denied when the hotel appealed the decision to the Seoul High Court. But the Court ruled in February in favor of the workers and ordered their reinstatement.

Legal issues remain, with appeals concerning compensation and other issues tied up in the Supreme Court. The union, the KFSU and the IUF are closely watching the situation. But a group of workers who struggled for nine years to maintain their dignity, respect and principles can celebrate their return as direct employees to the hotel where it all began. – and all those struggling against precarious work can celebrate with them.

The union believes that the international solidarity and support organized through the IUF was crucial to their victory, and has thanked all who supported them over the years.