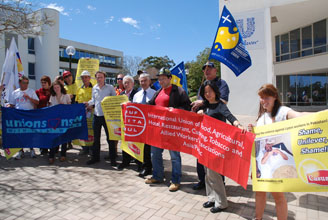 Unions NSW (the organisation representing trade unions in the state of New South Wales) led a protest at the Australasian headquarters of Unilever in Sydney in support of the casual Lipton workers in Pakistan. Members from fraternal unions – the Maritime Union of Australia (MUA) and the Construction, Forestry, Mining and Energy Union and IUF affiliates the Australian Manufacturing Workers Union (AWMU) and the Australian Workers Union (AWU) – joined the protest. 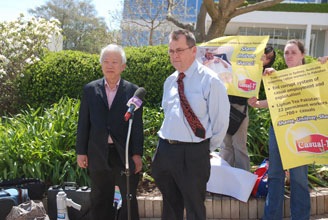 Cathy-May Gill, a member of the AMWU and a worker at Streets Ice Cream (which is owned by Unilever) asked, “How can anyone live on such low wages? How can anyone raise a family? These problems in Pakistan show how terrible outsourcing and casualisation actually is.

Mark Lennon, Secretary of Unions NSW, stated “Unilever is on notice. Australian unions will not tolerate blatant disregard for basic human and industrial rights, either here or in Pakistan.” Speaking of the conditions of workers at Lipton in Pakistan, Mark Lennon noted, “this is a basic issue of dignity at work and we will stand with our Pakistani brothers and sisters to ensure they get justice.”