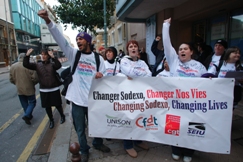 As Sodexo shareholders gathered for their annual meeting this week in Paris, a delegation of the company’s employees and their unions from France, the US, and the UK called for a global guarantee from Sodexo to improve pay and working conditions and guarantee the fundamental rights of Sodexo workers.

In an emotional exchange, workers from all three countries shared their experiences of working at Sodexo and spoke out about a wide array of abuses by the company, including refusing to allow workers to form a union without company opposition, discriminating against minority workers, failing to pay people for all the hours they worked, and failing to pay nationally agreed-upon wage rates.

“We’re trying to form a union, but Sodexo forced us into mandatory anti-union meetings, showed us anti-union videos, and brought individual workers in for one-on-one meetings with supervisors,” said Brenda Espinoza, a food service worker at Doctors Hospital in Manteca, California. “People are scared because the bosses have never come at us like this before.”

Unions representing Sodexo workers in France, the UK and North America issued a joint statement calling on the company to guarantee decent salaries and working conditions and ensure unimpeded access to their right to join trade unions.

“As a signatory to the UN Global Compact Sodexo often states that its employees are amongst its most important assets. In practice the reality for Sodexo workers in an economic sector where workers are too often insecure and woefully remunerated can fall short of both Sodexo’s own stated standards and the standards we would expect from a global company. To allow Sodexo workers the opportunity to advance their working and living standards the IUF calls on Sodexo to guarantee their employees access to the fundamental rights of freedom of association and collective bargaining and to do so across the entire company operation worldwide through engagement with workers and representative unions at national and international levels.” said Ron Oswald, IUF General Secretary in a press release issued by the unions taking part.

The delegation also communicated with shareholders inside and outside of the company’s annual shareholders meeting in U.S. Sodexo workers delivered petition signatures from thousands of Sodexo employees across 10 American States telling Sodexo management “that it’s time to raise standards for all Sodexo workers and we want the freedom to form a union.