Published: 04/10/2017
The Italian unions, FAI-CISL, FLAI-CGIL and UILA-UIL, have called an 8-hour strike at all Nestlé and Nestlé-FRONERI factories in Italy on Friday, 6 October.

At Perugina chocolates, Nestlé has announced over 350 redundancies. This is in violation of an agreement reached in April 2016 regarding investments and restructuring, in which Nestlé pledged that there will be no redundancies through the end of 2018.

The Nestlé-FRONERI joint venture ice cream company has announced that it intends to close the factory in Parma and dismiss 180 workers.

The IUF is calling on affiliates to show their support by sending solidarity messages and photos:

WE STAND WITH NESTLE-FRONERI WORKERS IN PARMA!

We encourage affiliates to use the image below for posters, leaflets and solidarity photos. 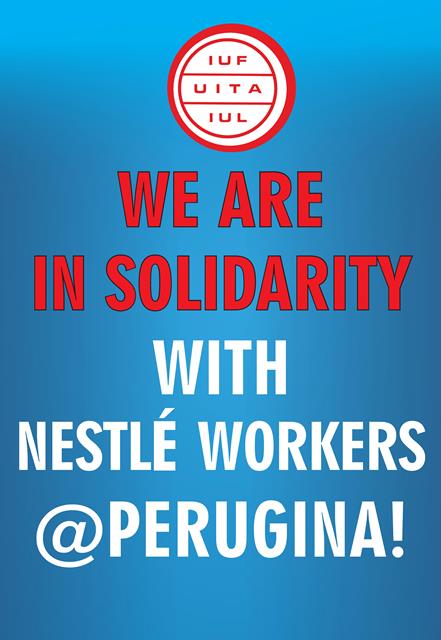 Please send messages and photos of any actions to [email protected] They will be forwarded to our sisters and brothers in Italy.