During the brutal police crackdown on a mass demonstration in Seoul by unions, farmers and civic groups on November 14, 69 year old farmer Baek Nam-gi was struck down by a water cannon aimed directly at his face by riot police. Police continued to fire on protesters attempting to carry the unconscious Baek to an ambulance.

In response to this violent suppression of the protest rally several organizations formed an alliance called the People’s Committee for Farmer Baek Nam-gi and Condemning State Violence. The IUF Asia/Pacific joined the alliance and organized solidarity actions in the region.

“State violence is a problem for all of us not only Mr Baek Nam-gi,” said Son Yeongjun, General Secretary of the Corea Catholic Farmers’ Movement (CCFM) and co-chair of the executive board of the Committee. “That is why trade unions, civil society organizations, cooperatives and even consumer groups joined the Committee. We are demanding an official apology from President Park Geun-hye, punishment of those responsible, and institutional changes to prevent such acts of state violence.”

The Committee is holding a sit-in protest in front of the Seoul National University Hospital where Baek Nam-gi remains unconscious and in a a critical condition. The protest is now in its 17th day.

Solidarity protests condemning state violence and expressing solidarity for Baek Nam-gi were held in several countries including Cambodia, Thailand, Myanmar and Pakistan. “I wish to strongly express our solidarity to CCFM in our common struggle to defend the rights of farmers and their communities in the face of neoliberal policies and the corporate ‘free trade’ regimes that threaten our livelihoods,” said Keo Chanra, Acting General Secretary of Coalition of Cambodia Farmer Community (CCFC). “We wish Mr. BAEK Nam-gi recovery soon so that we can stand together in solidarity to struggle for dignity and freedom for our farmers.” 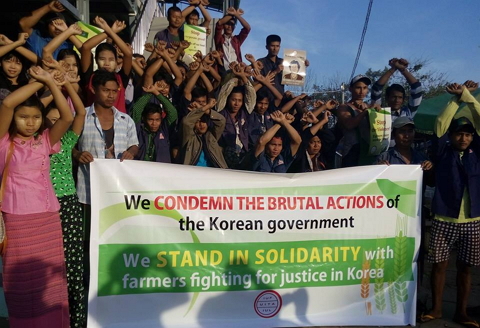