On 17 November 2009, workers at the Nestlé ice cream factory in Carthage were informed by a bulletin board notice that their factory had been sold to a consortium of local companies active in the food industry.

“In conformity with its policy of social responsibility,” the notice read, “Nestlé has expended all efforts to preserve jobs, the rights of the workers concerned, and maintain the production site.”

The only problem was that at no point prior to the sale would the company provide information to the union despite repeated demands in connection with rumours of an impending sale. Following the announcement, the Federation of Food and Tourism Workers (FGAT) to which the Nestlé Tunisia Union is affiliated, demanded details of the sale, details of the agreement on the transfer of the workforce and announced a strike for 3-4 December in the event that Nestlé continued to refuse information.

Shortly after Brother Habib Ben Aifa’s election as general secretary of the union in June, Nestlé launched an attempt to discredit him by soliciting complaints from customers: the hospitals and clinics he visits in his capacity as sales representative for Nestlé Nutrition. The attempt backfired, as witnessed by the numerous complaints lodged against the “auditor” sent to seek information about Brother Ben Aifa’s professional conduct.

Meanwhile he continued demanding a meeting with management to discuss the rumoured sale and its implications for the workforce.

In September, the day after confirmation of a meeting between management and the Nestlé Tunisia Union under the auspices of the Labour Inspectorate, Brother Habib Ben Aifa, was removed from his position as head of the medical sales force (Field Operations Manager), a position he had occupied for over 20 years. He was reproached for a drop in sales, a curious claim considering that there are no sales objectives for medical delegates responsible for marketing infant formula, in conformity with the WHO Code of Marketing of Breast-milk Substitutes! He was ordered to return his service vehicle, as his new function wouldn’t require any travelling but instead demanded “constant presence in the office”: developing and implementing guidelines for WHO Code compliance in Tunisia!

The Federation of Food and Tourism Workers and the Nestlé Tunisia Union have the full support of the IUF in their struggle for respect for trade union rights, including the right to information enshrined in ILO Conventions and the OECD Guidelines. 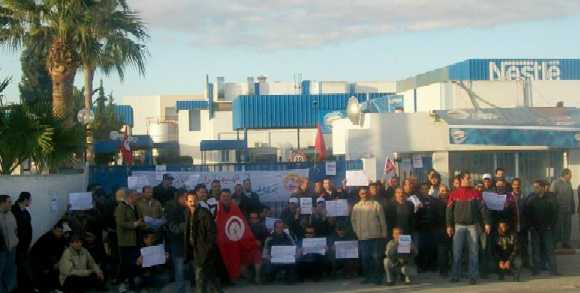