Published: 19/04/2017
The Swedish Hotel and Restaurant Workers’ Union HRF signed a new 3-year national agreement for the sector on April 18 which meets their key bargaining demands less than 12 hours before a national strike was scheduled to begin. HRF received strong national and international support in the run-up to the strike deadline. Members of the national center LO pledged active support to the hotel workers, including stopping deliveries and other concrete solidarity actions in the event of a strike. IUF members around the world wrote to the employers’ organization VISITA condemning its hostile bargaining stance and violations of trade union rights and expressing support for the union.

The new agreement provides for, among other measures: a SEK 1,650 (ca. EUR 172) monthly increase for full-time workers over a 3-year period; a 6.5% increase for overtime; a significant increase for the lowest-paid which meets or exceeds the increases for low-wage workers established in other sectoral agreements, one of the key negotiating demands; and the establishing of a joint working group with the employers to review housekeepers’ workloads.

The union has warmly thanked the IUF for the many expressions of international support it received. 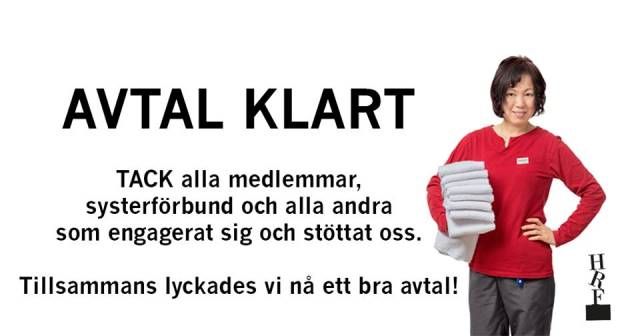 Many thanks to all members, sister unions and everyone else who was active and supported us. Together we managed to reach a good agreement!