Tunisia’s national trade union center UGTT, together with a wide range of civil society organizations, was among the organizers of the national march which brought tens of thousands of citizens on to the streets of Tunis on March 29 to show their firm rejection of violence and terrorism. The IUF took part in the march in solidarity with the affiliated FGAT-UGTT, which organizes food and tourism workers, and with the workers and citizens of Tunisia, along with many participants from the World Social Forum held in Tunis.

The UGTT, which played a pivotal role in Tunisia’s democratic revolution, immediately denounced the March 18 attack on the Bardo Museum as an assault on democracy and on one of the pillars of the Tunisian economy, tourism. 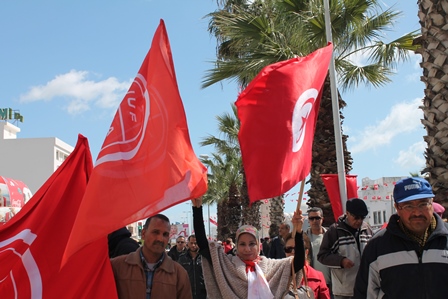