Published: 19/06/2014
The Swiss Parliament voted on June 12 to ratify the Domestic Workers Convention (ILO C189). The vote was: 106 in favour, 73 opposed, 6 abstentions. Switzerland is the third European country to ratify (after Italy and Germany) and the fifteenth on a global level. 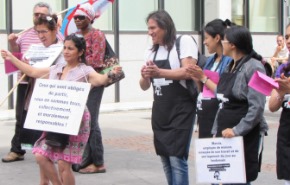 The International Domestic Workers’ Federation, IDWF,  warmly congratulated its Swiss affiliates SIT and UNIA who have been relentlessly fighting for the rights of domestic workers  and in particular for migrant domestic workers. “No domestic worker is illegal” was their slogan at this year’s commemoration of the first women’s strike in Switzerland, which took place on June 14, 1991.

A few days later, on June 16, IDWF members around the world celebrated the third anniversary of the adoption of Convention 189. For more information see www.idwef.org