Despite a ruling by the tripartite National Labour Relations Committee on April 4, ordering Yum! Brands Thailand to reinstate a national leader of the country’s first fast food workers’ union, Apantree Charoensak, on the same terms and conditions as she had before her unfair dismissal, the company continues to deny her access to the workplace, refuses to issue an employee ID card, and is withholding her benefits such as bonus pay.

This discriminatory treatment and continued victimization by Yum! Brands Thailand is retribution for Apantree’s role as president of the IUF-affiliated Cooks & Servers Workers’ Union (CSWU) and founding member of the Cuisine and Service Thailand Workers’ Union (CSTWU), representing regular and part-time workers at KFC outlets across the country. The two unions won their first collective agreements earlier this year.

Apantree was arbitrarily declared redundant by Yum! Brands Thailand on December 1, 2017, while other workers were transferred to the new franchise operations under the companies RD and QSA. After receiving official confirmation of her reinstatement from the Department of Labour on April 20, Apantree reported to work on May 4, but was refused entry and subsequently faces ongoing victimization as Yum! Brands refuses to fully comply with the National Labour Relations Committee ruling. 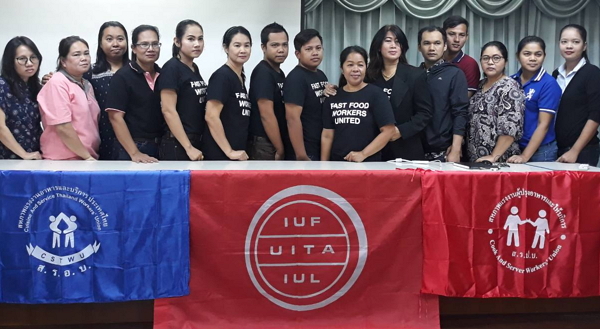