Published: 25/04/2018
The Coca-Cola Company’s recently published human rights report comes at a time of substantial slippage by TCCC in addressing human rights at the workplace, and specifically the right of all workers within the Coca-Cola system to freely form and join trade unions of their own choice and engage in collective bargaining with their employers. It evades the Company’s real-world responsibilities when it comes to ensuring respect for rights on the part of its bottlers – who employ the vast majority of the women and men around the world who manufacture Coke-branded products.

In his forward, CEO James Quincey proudly describes “Our more than 800 plants” which make up the global Coca-Cola system. The reader, however, is eventually informed that ‘our’ plants are really someone else’s, and the TCCC human rights policy applies only to the Company’s directly-owned operations – which employ less than 10% of the women and men around the world who manufacture Coke’s branded products. When it comes to the bottlers in which TCCC owns a substantial stake and to whom it sells the concentrate and licenses the brands, the Company has ‘expectations’ that they will respect the human rights of their employees but is evasive on how to deliver.

For over two years, workers at Coca-Cola Amatil in Indonesia have been organizing to form independent, democratic unions. The company has responded by systematically harassing their members, terminating their elected leaders and denying collective bargaining rights. The IUF has repeatedly brought these violations to the attention of The Coca-Cola Company, which has taken no meaningful action to ensure these abuses by a major regional bottler are remedied. The abuses continue, and TCCC’s “milestone” human rights policy offers no remedy. 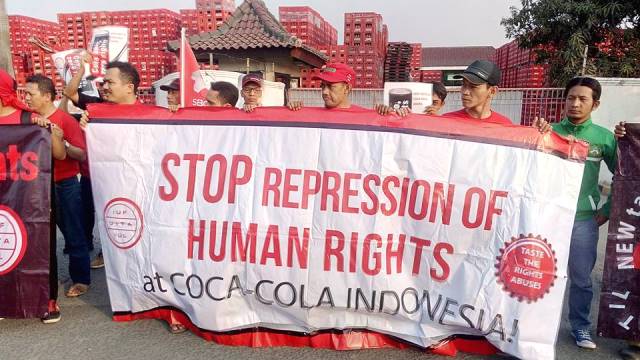