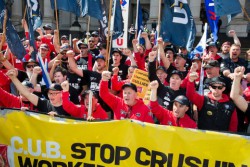 Thousands of union members and supporters marched through the center of Melbourne, Australia on September 8 in support of union members at Carlton United Breweries whose employment conditions came under brutal attack when they were told their pay would be cut by 65% under the terms of a new sub-contracting arrangement. The unions rejected the company’s diktat and have maintained round-the-clock protests at the plant.

The IUF Executive Committee, which met in Geneva September 7-8, sent a message of solidarity and support to the marchers and their unions.

CLICK HERE TO SEND A MESSAGE TO THE COMPANY!