Home/News/Two years of fighting for rights at Cargill Turkey – the struggle continues!

April 17 marks the second anniversary of the fight for trade union rights at Cargill Turkey. Two years ago, on April 17, 2018, 14 workers at Cargill’s starch plant in Bursa-Orhangazi were dismissed while trying to form a union. They were not the first workers at the site to be dismissed for union activity – 7 other workers were dismissed at the same factory for the same reason between 2012 and 2015.

Turkish courts, despite company appeals, have determined that the workers were unfairly dismissed, and ordered their reinstatement. Cargill will not reinstate them. Cargill contends that the workers were dismissed because the plant was forced to downsize. They can’t explain why, if this is so, the plant has hired 9 new permanent workers since December 2019, and failed to offer these jobs first to those who were dismissed after many years of service.

Cargill, which last year netted 2.6 billion USD in profit, doesn’t want a union at their operations in Turkey. The workers are determined to fight for their right to be represented by the IUF-affiliated Tekgıda-İş. The remedy for rights abuses is full reinstatement and a clear sign from Cargill that rights will be respected at the workplace.

For two years, the workers have picketed the plant, marched hundreds of kilometers, demonstrated at Cargill’s Istanbul headquarters and kept up the struggle. With the COVID-19 lockdown they have had to temporarily halt their public action, but maintain constant solidarity through social media. 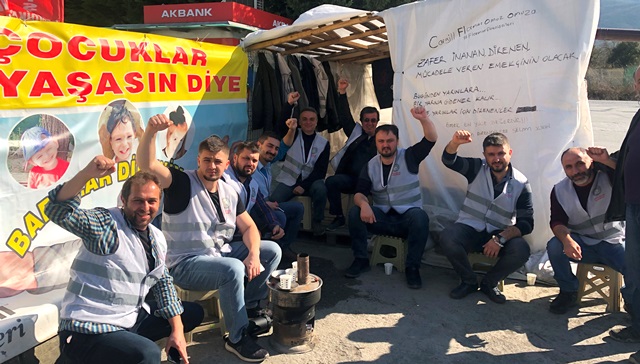 “Tekgıda-İş will keep up the struggle and maintain our determination to guarantee trade union rights in Cargill Turkey at all times, even the challenging times we face today. We will keep fighting until Cargill reinstates the unfairly dismissed workers and respects workers’ right to organize and be represented by Tekgıda-İş. We thank the IUF and our sister trade unions for their ongoing international solidarity and support. We will win this fight together” said Tekgıda-İş President Mustafa Türkel.

When the lockdown is lifted, the Cargill workers will again be taking public action, and the IUF will be with them.