In May 2012 women workers packing ice cream at Unilever’s Inmarko factory in Omsk (Siberia) struck for 3 days demanding union recognition and a return to direct employment. Their jobs had been outsourced to an agency but they continued performing the same jobs at Unilever on inferior terms and conditions.

They won recognition of their union NOVOPROF but since November 2013 Unilever management has resisted negotiating their wage demands. The union is demanding

Management has accepted some form of wage indexing but rejects the other demands, and insists that its meetings with NOVOPROF are only for “information and consultation” – not negotiation. 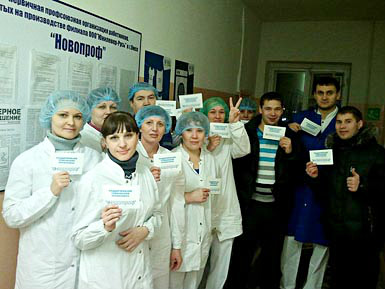 This left the union with no choice but to launch a public campaign. Workers – members and non-members – have signed a union petition in support of wage negotiations and recently reported for work wearing “I support the union’s demands” badges. The union actions have generated considerable attention in the local press and media.