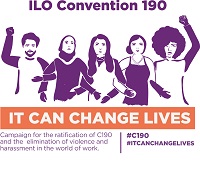 The adoption of an International Convention (C190) and its Recommendation (R206) on the elimination of violence and harassment in the world of work represents a victory for workers worldwide, regardless of their sector of employment or status. The workers’ group, employers’ group and member states of the ILO have recognised that being harassed or suffering acts of violence must be fought without exception. No longer fearing being at work or even engaging in work-related social activities can transform a worker’s view of their professional environment and improve their life considerably. Employers have responsibilities in this regard, and as of now, must seek to implement the provisions of these instruments.

The IUF has created a common logo with IndustriALL, UNI Global Union, the International Domestic Workers Federation (IDWF), Public Services International (PSI) and the International Federation of Journalists (IFJ), as well as a leaflet explaining C190 and R206 in layman’s terms. The key message is that C190 can change lives, including those of working women. Beyond the necessary ratification of the Convention by states, unions can as of now use collective bargaining to negotiate clauses or policies based on the wording of C190 and R206 to create a working environment free from violence and harassment.

The logo and the leaflet are set to be launched on 25 November, the International Day for the Elimination of Violence against Women and Girls. IUF-affiliated organisations are encouraged to use these tools, particularly in the HRCT sector. Indeed, the fight against sexual harassment is one of the priorities of the HRCT Trade Group Board, and at its last meeting in Boston, the Board called on IUF affiliates in the HRCT sector to take action specifically on November 25 to promote the IUF’s policy against this scourge, particularly in hotels owned by Marriott, the world’s largest hotel chain. These actions are part of the global Marriott campaign that aims to obtain a formal commitment from the company against sexual harassment, as well as the IUF campaign for hotel housekeepers.

Other materials produced in common by the global union federations mentioned above will follow, including 16 key messages on C190 posted throughout 16 days of activism following November 25. A video on C190 will also be distributed, as will other more detailed supports in 2020. All these materials will of course be made available to IUF affiliates.