Published: 13/03/2017
Four IUF-affiliated unions representing sugar workers in India took the struggle for trade union rights at the IFFCO factory in Suez, Egypt to the Mumbai headquarters of parent company Allana on March 7. Trade unionists gathered in front of Allana House, one of the company’s corporate centers, displaying a solidarity banner and distributing leaflets. The demonstration then moved to Allana Center some 1.2 kilometers away, where they submitted a letter from IUF General Secretary Ron Oswald to Allana’s CEO and distributed leaflets to the public. 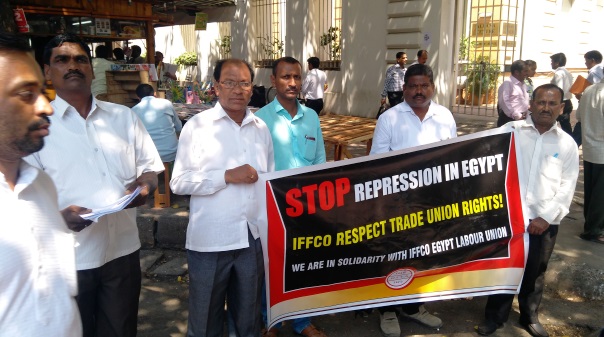 On January 29, nineteen IFFCO workers and union members and leaders were acquitted of charges of ‘inciting’ a strike, but the prosecutor has appealed the decision and the workers face retrial on March 19.  The company continues to bar the acquitted workers, including the union president and general secretary, from returning to work.

The IFFCO workers need your support – CLICK HERE TO SEND A MESSAGE to IFFCO and to the President of Egypt.