Following on the visit to the UK by an international IUF Coca-Cola ‘Zero Rights’ delegation, campaign meetings were held in Ireland with the IUF-affiliated SIPTU, with the Irish Congress of Trade Unions and with organizations representing high school and older students.

SIPTU, whose members are fighting for rights and recognition at The Coca-Cola Company’s bottling plant in Ballina, has produced a short video on one part of the campaign visit in which trade unionists and student activists explain their support for the global campaign.

Protestors met the Coca-Cola holiday season promotional truck’s appearance in Ballina with campaign leaflets explaining to consumers the dark side of the company’s operations. 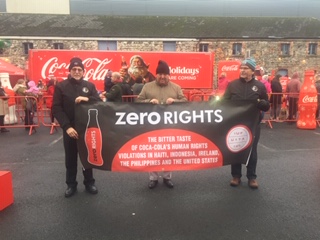