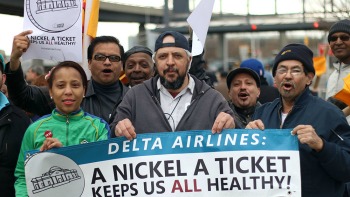 Airline catering workers employed by Sky Chefs have won an important new national contract in the United States. Under the terms of the new agreement, which was ratified by a 76% margin, the over 9,000 UNITE HERE Sky Chefs members will receive a minimum of $1.10 per hour in wage increases and at least one additional paid sick day each year.

Better clothing and footwear will be provided for those working in very cold temperatures, permanent work is strengthened through limits in the number of part-timers and grievance procedures have been enhanced.

Sky Chefs workers in California will move to a UNITE HERE health care plan as a first step towards better and affordable health care for all.

The new contract was a result of organizing efforts from UNITE HERE locals across the country, including in-kitchen actions, rallies, delegations and a large civil disobedience action in Washington, D.C.

The “Nickel a Ticket” campaign for affordable health care for all airline catering workers will continue.