A capacity for aggression at Nestlé, the world’s largest food company, is not limited to the aggressive pursuit of market share and aggressive cash flow management, qualities praised by investors and envied by competitors. It applies equally to industrial relations, where it receives considerably less attention. Violations of worker rights predictably make less headline noise than the latest quarterly results, a hefty dividend increase or the successful launch of a new product.

Corporate aggression, like other forms of aggression, is difficult to control. It can be restrained and repressed, for a time, under external pressure, but it eventually surfaces – unless there are control mechanisms in place at the corporate nerve center, extending down to the local factory manager.

Chameleon-like, Nestlé adapts to its environment. Aggression surges where there are few constraints. It is currently surging in Pakistan, where contract workers fighting for direct employment status and their union supporters at the Kabirwala dairy factory have been subject to mass dismissals, arrests and violence. And it surged in October in response to industrial action at the Nescafé factory in Panjang, Indonesia, where management launched the mass dismissal of union members after the conflict was resolved under the auspices of the Labour Department and the strike was already over in accordance with the official memorandum that the company and union signed. Even after the union agreed to sign the collective agreement, Nestlé management still continued its mass termination – clear evidence of management’s aggressive drive to destroy the union(see Nespressure returns with mass dismissal of union members in Indonesia/provocation and attacks on union leader in Pakistan).

Precisely because Nestlé lacks a genuine global industrial relations policy, preferring adaptation to principle, anti-union aggression lurks beneath the surface. In North America, where enforcement of worker rights is notoriously lax and companies can employ the full array of union-busting techniques while risking nothing more than a legal slap on the wrist (if that), companies routinely advertise for human resource managers qualified in “union avoidance techniques”. If you can’t bust a union, or defeat an organizing campaign, you don’t have the job. 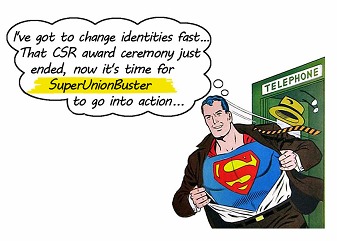 Not long ago, Nestlé was advertising for a human resources position in Dallas, Texas. Qualification number one? “Maintain a proactive & aggressive union-free culture”. (To view the actual advertisement click here). Nestlé has advanced beyond mere “union avoidance” and is prescribing aggression as the way to defeat union organization. 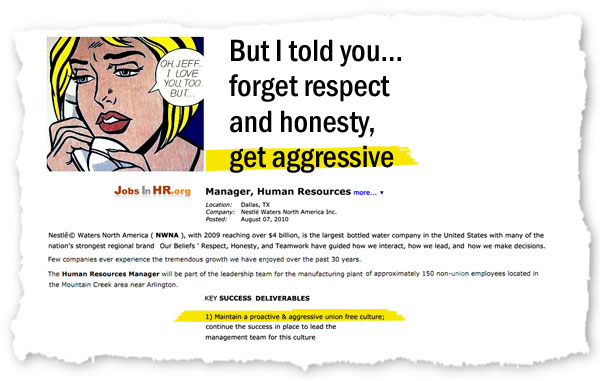 We assume the position was filled. This advertisement, together with a series of other advertisements for managers schooled in ‘union avoidance’ was brought to Nestlé’s attention. The result? The language was changed. Nestlé will no doubt offer a tour of its human resource recruitment advertisements to the CSR community, and use it to get a leg up on the competition. Have the practices changed? On their personal web pages, past and present Nestlé HR bosses still talk up their “union avoidance” abilities. And anti-union aggression is in full swing in Indonesia and Pakistan.