The leaders of Iran’s independent sugarworkers union are now in prison in the city of Dezful serving sentences for their trade union activity. 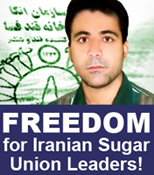 In a drive to destroy the union established last year by workers at the giant Haft Tapeh plantation/refining sugar complex, a court on October 12 sentenced 5 union leaders to immediate prison terms on charges stemming from October 2007. Three leaders convicted for their union activity last year for “endangering national security” in connection with worker action in 2008 had their sentences overturned on appeal in September. Two union officers, president Ali Nejati and communications officer Reza Rakhshan, both of whom face lengthy prison sentences, were still awaiting the outcome of their appeal when the court in the city of Dezful sentenced them on the similar 2007 charges.

Ghorban Alipour, Feridoun Nikoufard, Jalil Ahmadi, and Ali Nejati were all sentenced to 6 months’ immediate imprisonment and 6 months suspended sentences over 5 years; during which time they are barred from union activity. Mohammad Heydari Mehr received a 4-month term, 8 months suspended. Ali Nejati must serve his suspended sentence as prison time, meaning he faces an immediate one-year prison term. Should he lose his  appeal  on  the  2008 conviction, his sentence could  stretch to over 2  years. Previously we had reported that Nejat Dehli was among those sentenced. Recent information has established that Dehli, alone among the 6, was acquitted by the Court. Reza Rakhshan is still awaiting the final sentencing in his case.

Haft Tapeh workers in recent years have repeatedly had to resort to strikes and other actions to claim huge wage arrears and protest deteriorating working conditions. The union was officially founded in June 2008 following a 42-day strike to demand long-standing arrears. The Haft Tapeh union is an IUF affiliate.

The regime is clearly determined to crush the union by putting its entire leadership behind bars.

The fate of imprisoned transport and teachers’ union activists shows that the Haft Tapeh prisoners risk prolonged physical and psychological abuse. The IUF urges all defenders of democratic and trade union rights to mobilize in their defense.

Act Now! – CLICK HERE to send a message to the Iranian state and judicial authorities, calling on them to immediately and unconditionally release the jailed unionists and annul their sentences, and drop all charges against Reza Rakhshan. Please note that some messages may bounce back – do not be discouraged! Server overload is a common condition in Iran – some messages will get through, making the point that the persecuted trade unionists enjoy international support. The Haft Tapeh union leaders are also supported by Amnesty International.