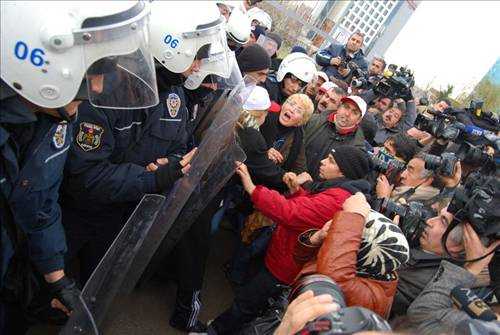 Workers, their family members and supporters have been demonstrating in near-freezing temperatures in protest against a snap government decision to close their workplaces at the end of January 2010.

The protest began in front of the headquarters of the AKP (the political party in power), but the police cleared the area on 16 December and forced the demonstrators to a nearby park. The following day, police put up barricades around the park and then used water hoses and tear gas against the demonstrators. Police violence escalated and clubs were used against the demonstrators, many of whom had to be hospitalised. Mustafa Türkel, president of IUF-affiliate Tekgida-Is, which represents these workers, and general secretary of the national confederation Türk-Is, was arrested, but then released later that evening. The police violence caused an outcry in the Turkish Parliament, but the ruling party continues to refuse to accede to the workers’ demand that they be given alternative employment with their full employee benefits, as the law on privatisation provides.

The protesters are now gathered in front of the headquarters of the Türk-Is national trade union confederation, while about a dozen workers remain in the the park on hunger strike. Despite police attempts to prevent further busloads of TEKEL workers from entering the city, their numbers are steadily increasing. The city of Ankara has provided them with shelter in sports facilities and Tekgida-Is is providing food and transport. Act Now! – PLEASE CLICK HERE TO SEND A MESSAGE TO THE GOVERNMENT OF TURKEY AS A MATTER OF URGENCY!

These workers are determined to carry on their protest until the government accedes to their demands. And they urgently need your support!