According to the report, the US seafood industry has relied heavily on H2-B guestworkers and undocumented immigrants to drive down labor costs to maintain its price competitiveness among international producers. A 2009 survey in New Bedford found that nearly 75 percent of the workers in its seafood processing industry were undocumented immigrants. The US Department of Labor certified over 5,700 guest visas for seafood related positions in 2014, a marked 15 percent increase over 2013.

Workers’ reports said that in the housing facilities provided by processing companies up to 20 people lived in a single trailer, without access to proper sanitation and sometimes with strict curfews. Of the 126 seafood workers surveyed in New Bedford, 25 percent reported having been injured on the job. The majority of workers reported having to purchase their own safety equipment. 44 percent of the surveyed workers reported that they were not paid for overtime work. Female workers experienced sexual harassment and verbal abuse in the workplace as well as in the company-provided housing facilities. Some women spoke of unwanted sexual advances by company brass, and of being fired for rebuffing such advances.

Due to employers’ threats of retaliation which include firing that can result in deportation, guestworkers are hesitant to report mistreatment and take action. This massive increase in the use of migrant labour has led to almost complete de-unionisation of the seafood industry – a situation that is now challenged by the NGA whose aim is to raise the floor for workers in the sector. 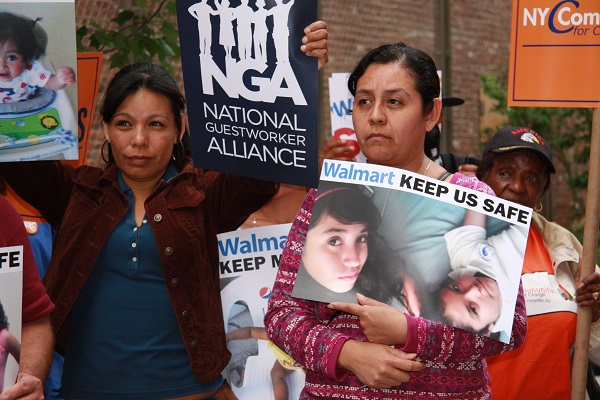