The IUF-affiliated UFCW leafleted customers at Phillips Seafood’s flagship Baltimore restaurant on a busy May 9 evening in solidarity with the union fight for permanent jobs at the company’s crabmeat factory in Lampung, Indonesia, where workers with up to 15 years of service are still denied permanent employment contracts.

In mediation talks with the local Labour Office in Indonesia, convened in response to the union’s demand for negotiations on the workers’ employment status, factory management has declared that only the US owner can make that decision – so the UFCW took that message directly to the parent company. UFCW Vice President Mark Lauritsen (who is also an IUF Vice President) and head office staff together with a contingent of UFCW Local 27 members leafleted restaurant customers and spoke with management of the restaurant to explain the Indonesian situation and their support for the crabmeat factory workers fight against the factory’s brutal disposable jobs regime. 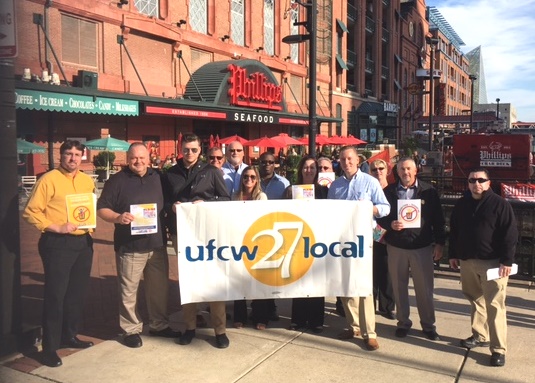