On International Labour Day 2017, workers at Mission Foods in Pennsylvania will send a clear message that they, like their predecessors in 1890, are not going to be intimidated by management bullying and harassment.

Mission Foods is owned by Gruma, one of the largest corn flour and tortilla manufacturers in the world. In 2016, the workers at the Mission Foods Mountain Top plant joined UFCW Local 1776. Management responded by hiring union avoidance consultants, holding non-productive collective bargaining negotiations and harassment of union members. 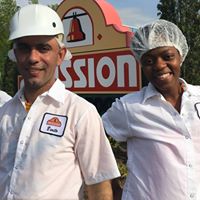 But Mission Foods workers (pictured left) are refusing to give in. Their message is “we joined the union to have a voice at work and a better environment”. … and they have produced their own leaflet to spell this out on May Day.

In March, the IUF together with UFCW branches representing Gruma foods workers in the USA met to discuss strategy and pledged to stand with UFCW Local 1776.