IUF affiliates in Indonesia have launched daily mass protests outside the Lampung, Indonesia seafood factory of Bumi Menara Internusa (BMI), a major supplier to the global seafood industry, following the May 17 arrest of union secretary Reni Desmiria. Eight years after she began work at the factory as a contract worker, the company has determined that she submitted a fake high school certificate to get hired, reported her to the police and is pressing for the maximum criminal penalty – 6 years’ imprisonment. At the insistence of the company, she was arrested at her home by police armed with automatic weapons.

On June 2, BMI management  visited the union secretary in prison to inform her that she can be immediately released on condition that she resigns her position at the company, confirming that her arrest, imprisonment and prosecution are at the request of BMI. She has refused.

The SPBMI (BMI Workers’ Union) has been struggling since 2012 to put an end to the widespread abuses at the factory, including the massive use of casual employment contracts which generate permanent insecurity and particularly affect the many women at the factory. BMI’s mobilization of police and prosecutorial power signal a vicious escalation in the company’s actions to ensure that abuses continue. 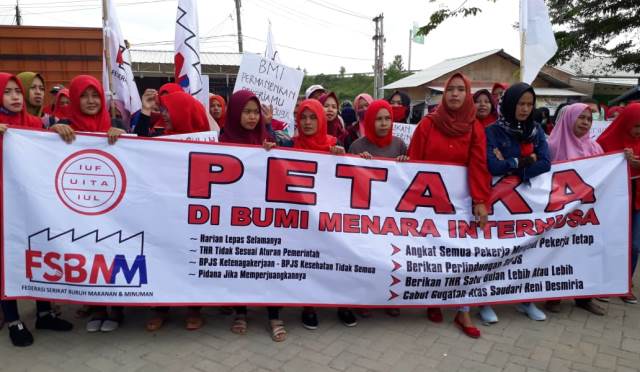 The unions are demanding her immediate release and a reduction in the sentence commensurate with the nature of the offense. The IUF has contacted BMI’s major overseas customers to insist that they intervene with the company to stop this outrageous anti-union aggression.