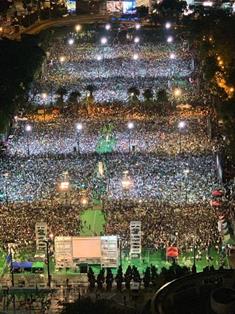 Some 180,000 citizens of Hong Kong took part in the annual June 4 vigil to commemorate the brutal 1989 repression of China’s democracy movement. ‘We will not forget’, declared the Hong Kong Confederation of Trade Unions (HKCTU), that ‘During the 1989 democratic movement, workers from various cities formed their own workers’ autonomous federations to break free from the shackles of the All-China Federation of Trade Unions.’

For the past 30 years, the HKCTU has been one of the leading organizers of the annual commemoration. Defending the memory of June 4 is, for the HKCTU, a vital part of defending democracy – in Hong Kong and on the mainland.

This year’s vigil was held as independent trade unions and democratic civil society in Hong Kong are coming under even greater pressure. Prominent leaders of Hong Kong’s 2014-2015 Occupy Movement have recently been convicted and jailed; HKCTU activists face potential criminal prosecution for their support and participation in the movement; and the government is attempting to fast-track a new law to enable extradition to the mainland, which the current legal system does not provide for.