On May 17 the first IUF Global Housekeeping Campaign meeting was held on the island of Langkawi in Malaysia. One of the key demands raised by housekeepers was the need to work in teams of two or three when cleaning rooms.
In recent years they have been forced to work alone and in isolation. This increases workloads and harms their health as well as putting them at risk. “By working in teams of two or three workloads will be more reasonable and more jobs will be created,” said NUHBRW Branch Secretary Nadzir Iman Muhammad.
At the conclusion of the meeting the delegates, members of the IUF-affiliated NUHBRW from 18 hotel resorts in Langkawi, declared their support for the campaign to “Make My Workplace Safe!” This commitment is particularly important because the next Asia/Pacific regional meeting on the Global Housekeeping campaign will be held in Langkawi on September 11-12, 2015. 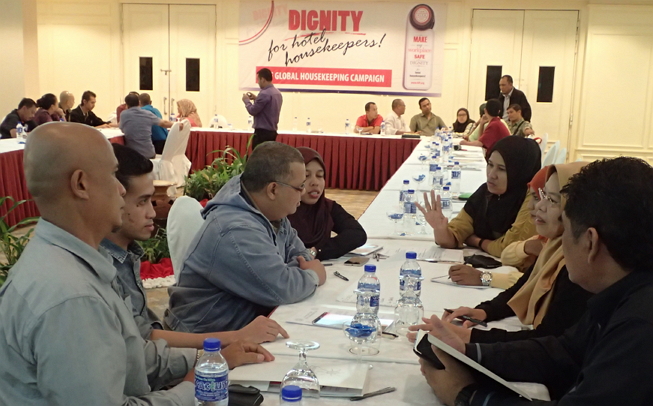