Members of the independent, democratic trade union at the Sejong Hotel in Seoul continued their weekly protest actions today, denouncing a new agreement signed by the president of the
management-sponsored union that shifts all workers to a performance-based pay system. Since 2011, management at the luxury 5 star hotel has used new laws allowing multiple unions in the workplace to sponsor a pro-management group and undermine the Sejong Hotel Labor Union, which is a member of the IUF-affiliated KFSU.

Union members have been systematically victimized by management, demoted and forcibly transferred to take on heavier workloads in an effort to force their resignation. Wages were effectively frozen for the past three years, declining by 10-30% in real terms. The scope of union membership was also eroded, with several positions declared as ineligible for union membership, in collaboration with the pro-management union.

The Sejong Hotel Labor Union, which has continued to defend its members against discrimination and harassment over the past five years, maintains regular protest actions outside the hotel. These protests escalated in response to management’s move to impose performance-based pay through an illegal agreement signed by the pro-management union bargaining team without a membership vote. Management’s aim is to further cut wages through subjective and arbitrary performance targets and to terminate “under-performing” workers without any possibility for workers to be represented by their union.

IUF Asia/Pacific Regional Secretary Hidayat Greenfield joined the protest action outside Sejong Hotel, saying “The fight for democracy and human rights here at Sejong Hotel is an important and necessary part of our bigger fight to restore democracy.” The IUF will take international action to ensure that the right to freedom of association is restored at Sejong Hotel. 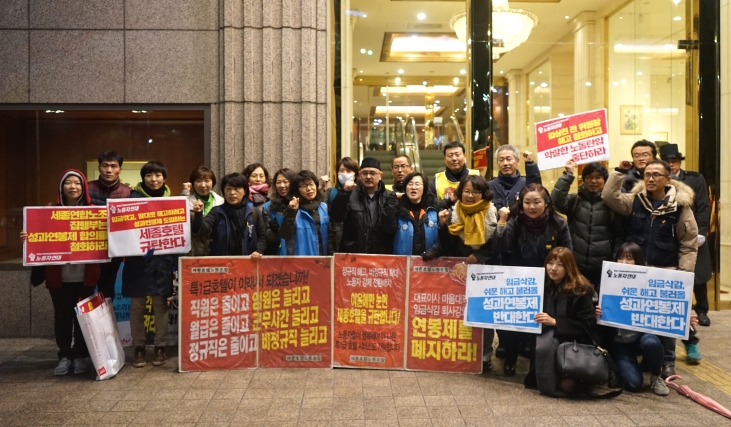