Representatives of IUF Asia/Pacific and the IUF-affiliated SEIU expressed their solidarity at a protest action in front of the McDonald’s Korea head office in Seoul, organized by the Arbeit (Part-Time) Workers’ Union. Arbeit Workers’ Union has been campaigning and organizing in McDonald’s Korea for the past three years, bringing attention to abusive working conditions.

The union has organized members in a McDonald’s outlet in Seoul and today the union leader from that outlet brought her members’ ten demands directly to the head office. She hid her identity for fear of being terminated: two years earlier, union member, Gahyun Lee was terminated by McDonald’s Korea management for engaging in union activities. The 10 demands include a living wage of 10,000 Korean won, an end to wage theft (unpaid forced overtime), and removal of strict time limits on food preparation that leads to burns and injuries as well as the 17-minute 30-second home delivery time limit that increases the risk of road accidents causing injury and death. 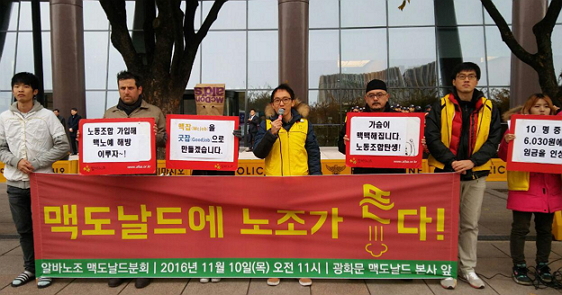