Home/News/Workers locked out as situation escalates at Gilde Brewery 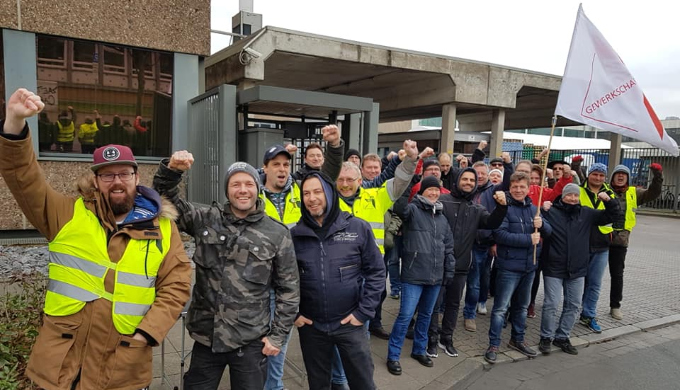 The IUF-affiliated German Food and Allied Workers Union (NGG)published a press release about the ongoing dispute over collective agreements for its members at the Gilde Brewery in Hanover. Please find below the English translation of this press release.

Workers locked out as situation escalates at Gilde Brewery
Adjan: “Management has gone too far”

In the ongoing dispute over collective agreements for workers at the Gilde Brewery in Hanover, along with its three new independent companies, management has now escalated the situation still further by locking out workers at one of these four companies until the end of the week.

Freddy Adjan, Deputy President of German trade union NGG says: “The management has gone too far with its latest decisions on the pay dispute and is breaking the law. It has repeatedly prevented the works council from exercising its rights, locked out workers and published the names of strikers – a massive breach of our colleagues’ right to privacy. We will report this to the state’s data protection commissioner.”

The German Food and Allied Workers Union  (NGG) is staging a rally on Tuesday 4 February 2020 at 1.30 pm.
Location: Gilde Brewery, Alte Döhrener Straße, 30173 Hanover (in front of the gates)
Speakers:  Johannes Specht, Head of NGG’s Collective Bargaining Department
Jeanine Weigel, Secretary of NGG’s Northern Division
On the fringes of the rally there will be opportunities to talk to strikers and the NGG about the background to this pay dispute, the like of which has never been seen in Hanover.

In September 2019, the management decided that it would no longer accept collective agreements for the 130 workers at Hanover’s oldest brewery. This led the trade union NGG to call for warning strikes. Lena Melcher, head of the NGG’s Hanover region, comments: “A meeting in August produced no results, then the management cancelled the second meeting in September and put us off indefinitely. That’s why the NGG called a strike ballot at the end of November. This showed that 94 percent of our members support the demand for fair working conditions and collective agreements. This clear vote should also be taken seriously by the company’s management.”

The NGG expanded its industrial action in January and workers at the brewery – which has now been split into four companies – are staging multi-day strikes. Melcher: “Let me be very clear: we are only demanding what is a fact of life for millions of workers in Germany – collective agreements. We want all employees at Gilde to have equal working conditions and put an end to the company’s two-tier structure. Unfortunately, we are witnessing how the Gilde management are using tough and legally questionable ways of countering the elected works council, the workers and their demands. We are still prepared to resolve this conflict as quickly as possible. Therefore we once again call on management to enter into collective wage negotiations with us. Once this happens, we can quickly call a halt to the current strike action.”