The housekeepers and valets of the upscale Hotel Be Live Experience in Lanzarote, in Spain’s Canary Islands, are on strike against outsourcing and precarious jobs.

The 2012 austerity-driven labour market ‘reforms’ of the governing Partido Popular paved the way for an epidemic of mass outsourcing in the hospitality and service sectors; workers were dismissed and rehired as employees of a services’ company at a fraction of their former wages.

The Hotel Be Live Experience outsourced the work of its housekeeping departments to the multi-services company Gesner S.L., which cut wages by almost 40 percent. Dozens of protests and many union complaints to the Lanzarote Labour Inspectorate forced Gesner to increase wages by 500 euros, but the company reduced the number of jobs, increased the workload and lengthened the working day.

Workers were required to clean up to 26 rooms a day in addition to cleaning other areas, compelling them to work up to 10 hours a day without stopping to eat in order to complete their work. 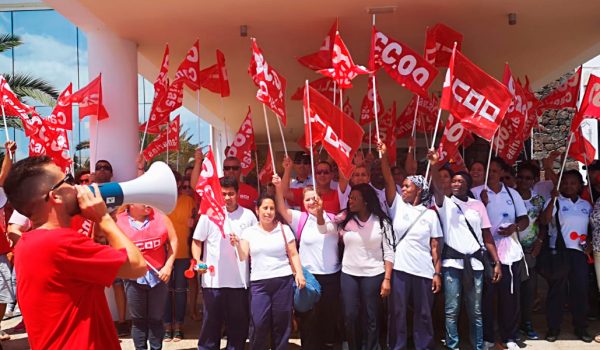 The housekeepers are rising up and the union will escalate the strike action if there is no response from the company. “There is no turning back,” according to the CC.OO Services Federation.

“The precariousness to which these women are subject all over Spain is especially unsustainable against a background of economic recovery” and record tourism activity, says the union.